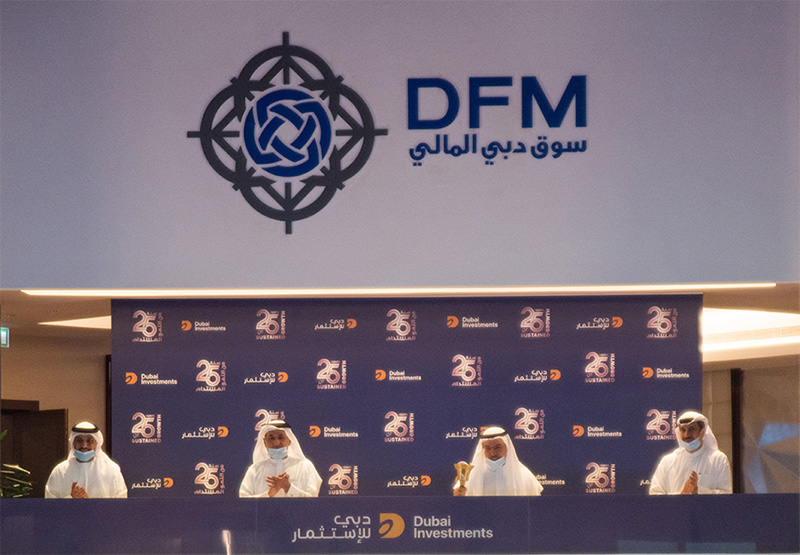 Total value of trading at AED 169.5 billion since listing and as of end of June 2020
AED 6.59 billion distributed as total cash dividends and bonus shares since inception

Dubai Investments PJSC, a leading Middle East investment and a public joint stock company listed on the Dubai Financial Market (DFM) celebrated its silver jubilee anniversary, marking 25 years of investments in the region, with a bell ringing ceremony at the DFM.

It is noteworthy that Dubai Investments is amongst DFM’s most active traded companies with a total value of AED 169 billion since listing, composing of 1.2 million trades of 47 billion shares, as of end of June 2020.

H.E. Essa Kazim, Chairman of the DFM, said, “We are delighted to host the special bell-ringing ceremony on the occasion of Dubai Investments’ silver Jubilee. Dubai Investments has been amongst the first listed companies since DFM’s inauguration on March 26th 2000. We look forward to strengthen our relationship with Dubai Investments and enable it to continue availing the numerous benefits of DFM listing including the linkage with our large and diversified investor base that exceeds 845 thousand investors and embracing international best practices of disclosure and transparency, corporate governance and investor relations, which creates value for its shareholders.”

“As part of the company’s future strategy, Dubai Investments will channelize the resources towards Investments in youth, artificial intelligence and sustainability, identified as the three major pillars governing the company’s investments and businesses in the future. These pillars will lead Dubai Investment’s responsible investments across various sectors, constituting future value-adds and will continue to diversify investments locally and internationally which were and still are a guarantee for the risk allocation, integration of vision and the economic structure of Dubai Investments”, added Khalid Bin Kalban.

With 25 years of strategic investments, a robust business model backed by strong partnerships with government agencies and private companies and with 16,502 shareholders (as of June 2020), Dubai Investment’s value of shareholders’ equity has recorded a growth from AED 650 million at inception to AED 12 billion as of Dec 2019 with AED 6.59 billion distributed as total cash dividends and bonus shares since inception. The company has recorded an accumulated net profit of AED 14.5 billion with a 21% return on investment over the last 24 years.